Universal joints usually consist of two yokes – also known as forks – and a central cross-shaped element. The actual construction of this cross – or spider – is not standardized and varies from design to design. It can be manufactured either as a single component or as an assemblage of several separate components, typically a block or cube and pins which are fixed in the block to form the cross. 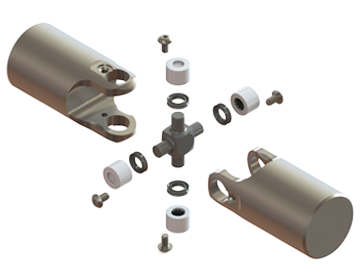 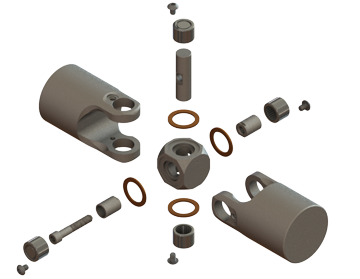 Universal Joint with Pins and Block

Constructed crosses, which are often referred to as pin and block crosses, have blocks and pins generally CNC-machined from bar stock. The assembled cross consists of three or more individual parts. The common arrangement is one block with two or three, sometimes four pins.
Depending on the design, the pins rotate in the block or the yokes.

The tradeoff between a constructed cross and a complete cross is the way of assembly. A constructed cross (pins & block) can be assembled inside the yokes which can sometimes require fixturing or tricky manual work but when assembled will be in place with tight tolerances if machined correctly. A finished cross can be placed easily inside the yokes but the large gaps require the installation (and securing) of plain bearings, also referred to as bushings.

Plain bearings are the simplest bearing type. In universal joints, the cross pins can run either directly within the joint yoke ear holes or in a bushing fitted inside the ear hole. Depending on the application, the areas of the yoke that take the highest load can be heat treated, or the contact surfaces hardened and ground/reamed to improve the running characteristics, reducing the friction between pin, block and yoke. 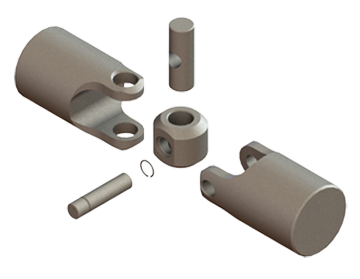 The durability of a plain bearing universal joint depends on the transmitted torque and the rotational speed of the shaft to which the joint is connected. The joint’s angle of deflection also comes into play. The higher the angle, the rotational speed and the torque, the greater the load on the joint. An excessive torque usually causes the joint to break. An acceptable torque at excessive speeds causes lubrication failure, which in turn leads to increased friction, resulting in extreme heat generation and increased wear. In the worst case, the pins, block and yokes may break or fuse. In any event, the joint becomes unusable.

High speeds are also problematic for joints fitted with plain bearings, even if the transmitted torque remains low. The need for frequent lubrication of the bearing surfaces can present a problem where an oil-bath or drip lubrication system are not possible, as insufficient lubrication can lead to bearing failure caused by excessive temperature after just a short time.

A solution to reduce friction between the bearing faces is the use of needle bearings in place of the plain pins or bearing bushings. Although needle bearings reduce the joint’s transmittable torque, they ensure that the joint can operate for longer periods of time without continuous lubrication. In addition, the technical data and calculation methods for specific loads and speeds that exist for roller and needle bearings allow the bearings’ service life to be estimated. Because of the numerous influencing factors occurring, service life cannot be accurately calculated for plain bearing joints. As a general rule, roller or needle bearings should be used for frequent- or continuous-duty applications with shaft speeds of more than 1,000 revolutions per minute. Plain bearing joints can generally be operated at such speeds for short periods. Their ability to handle these for extended periods depends on the materials used, finishes/coatings, and the lubrication.

Universal Joint with Pins and Block

In addition to the tendency to generate friction heat, plain bearings are likely to experience increased wear from abrasion. Even when overheating is not an issue, the running surfaces of plain bearings tend to wear, causing play or backlash within the bearings. In some cases, for example in motion control applications where precise positioning is vital, play or backlash is not tolerable. Here, the joint must work at near-zero play or backlash, often for extended periods. The exceptionally low wear of the needle-bearing joint makes it the preferred choice even in low-speed, high precision applications.

Did not find what you were looking for?